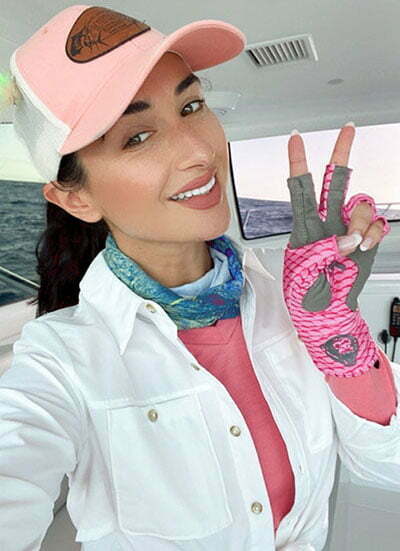 I never shied away from learning something new. A healthy mix of inquisitive and confident, I was raised to believe in my own abilities and to look at challenges as opportunities for expansion. My father was a high school head football coach, and I spent a better part of my childhood on the sidelines, meandering between giants and studying the plays with an intense focus. It is mainly for that reason I have always felt comfortable in predominantly “male” settings and could hold my own in those settings when needed.

When I met my husband, he was sitting at a table of larger-than-life captains, all legends in the industry; their voices booming as they shared stories in a language seemingly all their own. One of our first dates was a quick 60-mile fishing trip off Montauk. It was one of those heavy, hazy summer days without a breath of wind where the line between sea and sky is indecipherable. About an hour into the trip, we hooked a mako. I had never seen a shark so close, especially one so feared and revered. The rush of the catch- how quickly it all happened- was a thrill. From then on, I knew that I had two choices: I could spend my life waiting for Matt at the dock, or I could be there in the action, sharing a love for the sea.

Growing up sailing, I had a different appreciation for the mighty North Atlantic. How, at times, it could be eerily still, without a whisper, let alone a breeze. The way the color of the water changed with the seasons, from summer’s sapphire to that navy foam of winter we all know too well. Sailing makes you think like a bird and pay attention to what is above the surface; fishing challenges you to think deeper – like a fish.

My first real fishing trip with Matt was down in Isla Mujeres, Mexico. We were invited to participate in what the island is best known for: sailfishing. I’d be the only female angler, and the seas were expected to be “a bit choppy” on the way out. But I knew that I could handle it and wanted to prove myself and to myself that I was as hearty as I believed. That day we caught the boat’s current sailfish record: 53. I’ll never forget the way the sailfish from below and the frigates from above worked in unison to corral the school. It was like watching an episode of Blue Planet in real-time. I could see what all the fuss was about.

While it has become less uncommon to see women out there in the blue, being a woman in the cockpit of a boat is, at times, a unique space I enjoy occupying. The truth is, some of the most fascinating women I know are captains’ wives who have distinguished themselves in their own right as top anglers. Frankly, I appreciate occasionally being underestimated and typically over-delivering. While those of an outdated mindset still insist on gendering the sport, I have learned that the ocean is the great equalizer. And when the rod is bent, the whole boat is fighting the fish with you.

Today, I’m privileged to find myself surrounded not only by some of the most well-respected captains but also the best teachers. Whether on a fly or off the outrigger, fishing is an opportunity to reconnect with nature and disconnect from all that distracts us. For those land lovers, I respect the job that has to be done on the homefront: keeping the well-oiled machine running. But for any woman who is considering the sport, I encourage you to get in there, shoulder to shoulder with the best of them. There’s enough room in the cockpit.

Tatiana and Matt Carter spend their time between Jupiter, FL, and Montauk, NY, where Matt is in sportfishing/yacht management (252-347-9555). Usually accompanied by their Boston Terrier, Gimlet, the trio can be found somewhere between the canyon and the creek. If you see them on the water, be sure to say hello!